Home » Art of Living » Inadequate Communication: Major Cause of Misunderstanding Leading to Quarrels, Conflicts and Sufferings

Inadequate and improper communication is the major cause of more than ninety per cent of misunderstandings leading to quarrels, conflicts and sufferings around the world — at home, in the office or at national and international level.

When someone says something, do we pay attention and listen carefully or is our mind distracted with something else? Do we have hundred per cent presence in the present moment and in the place where our body is?

There are different stages in communication where gaps arise and the original message gets distorted or lost completely. The first gap arises between what is said and what is heard. When something is being said we listen half while something else is going on in our mind or we may selectively choose to hear what we want to hear and be deaf to the rest of the message.

The second gap in communication arises between what is heard and what is understood. We may not understand exactly what was said because we didn’t hear fully when it was being said. So we get a wrong understanding about what was said.

The third gap in communication develops between what is understood and what is interpreted creating further distortion of the original message. We interpret what is heard and understood according to our own individual mental conditionings, imaginations and projections.

A fourth gap in communication develops between what is interpreted and what is communicated to the next person, depending on what the next person hears, understands and interprets, further distorting the original message.

A message “Babu’s marriage fixed with Limaye’s daughter”, was supposed to be sent by telegram through telegraph office of one of the post offices. As usual the telegraph machine was out of order and the message was passed to the destination post office by telephone. By the time the message reached the intended recipient, it read “Babu’s garage mixed with lemon water!!”

What is said and heard and what we choose to understand and interpret also depends on our mental conditioning and projections. Depending upon who is interpreting it, the meaning could become diametrically opposite. For example, when boys and girls of an English class were asked to punctuate the sentence ‘Woman without her man is nothing’, the boys punctuated thus: ‘Woman without her man, is nothing’. The girls wrote: ‘Woman: Without her, man is nothing!’ We have two diametrically opposite meanings to a simple sentence.

Lack of proper communication is the biggest problem in any relationship.

Many a times people are not open with others in communication. They don’t communicate very clearly, without any ambiguity, what exactly they want to say. They keep beating around the bush instead of coming straight to the point. People, by and large, have little time and patience for it. Often we also suffer due to our inability to say no to something we don’t relish doing.

For example, if someone asks us to do something which we don’t enjoy doing, instead of saying no, we end up accepting it with a smile and curse within for accepting it. In such a situation we suffer from mental acidity – accepted externally, but rejected within. We should learn the art of saying no without offending the other person. In such a situation we can say, “Earlier also you had given me similar work, which I really don’t enjoy doing. So my mind is not hundred per cent in the work, due to which it doesn’t turn out to be perfect. Neither are you happy nor am I satisfied with the work. So it is better that you give this work to someone who enjoys doing it.” That is all it takes to prevent mental acidity.

The greatest mistake we humans make in our relationships: We listen half, understand quarter, think zero and react double.

So let us listen carefully when something is being said by having hundred per cent presence in the present moment and eliminate the first gap in communication. Nature has given us two ears and one mouth. We need to use it in that proportion so that we hear exactly what is being said.

On a lighter note… 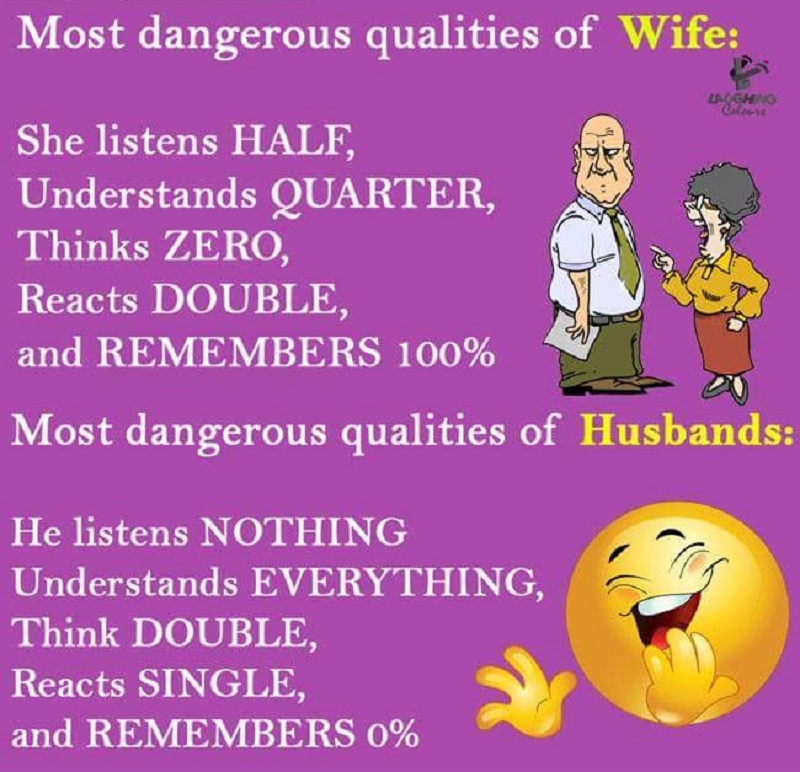 How do Animals Cope with their Sufferings…?

Miseries and Sufferings and the Law of Karma