This is the story of a little girl called Ranu, who grew up studying in a convent, where besides the three R’s, she was taught to pray.

‘‘Ask and you shall receive,’’ says the Bible and Ranu had been trained well in the art of ‘asking’. Not just that, she also learned to do small acts of kindness, to be generous and cultivate virtues. She was taught to remember that her Guardian Angel watched over her constantly.

In school, she and her other little friends prayed regularly for a variety of favours. Prayers included appeals for a bright, sunny morning on sports day, for flowers to bloom in the manicured school garden in time for the flower show, for seniors at school to perform well in their Board exams… the list was quite long.

Ranu also had her own little list of personal prayers that she was certain needed immediate attention. “Please, God, give the measles to Miss P Alvarez,” she pleaded, ‘‘…for giving me a zero in my drawing test.’’ But Miss Alvarez looked none the worse than she was; in fact, she seemed to look even better with each passing day. Reluctantly, the disappointed Ranu gave up on this.

She didn’t give up praying, however. ‘‘I’ve never fainted at morning assembly,’’ she informed Him, ‘‘though girls around me keep dropping like nine pins. I feel so jealous of them God, especially when they’re fussed over and given a glass of yummy orange juice. Can’t You let me have a blackout too, just once?’’ But no! He had decided to ignore her plea again.

Then her best friend Anju fractured a bone in her foot. Her foot was now in a cast, and Anju was turned into a hero overnight. Her classmates rallied around her to touch the cast and write little messages of encouragement on the plaster of Paris. Anju’s fan following grew by the day; they followed her around. Ranu’s heart was consumed by envy.

‘‘Can’t You do anything for me? I want to feel important, too. It’s just not fair. I want a fracture. Perhaps You could break my hand… No, on second thought, I need both hands to do my favourite needle work. Okay, my foot, but not the right one, please.’’

Ranu had no such luck. All her pleas seem to have fallen on deaf ears – why wasn’t He listening? It seemed as though she simply did not exist (for Him). She tried her best. She slid down the banisters backwards, raced up and down the staircase three steps at a time and even jumped off the swing in the hope that she would at least sprain her ankle. And what did she get in return? An unscathed body and a summons to appear before Mother Superior in her office!

‘‘Child, we have had enough of your wild ways. You will be gated. No morning walks for you for the next three weeks.’’

For Ranu, who loved nothing more than meandering in the woods that surrounded her school, this was an awful punishment. What would she do?

Later, much later, when life had moved on beyond childish dreams and innocent school girlish demands, when Ranu had grown to adulthood having weathered many challenges in life, she learnt the true value of prayers that go unanswered. And, that when He leaves some prayers unanswered, it is His way of showing that He knows what is best for us. He does answer every single prayer but in His own time and sometimes, when a prayer goes unanswered, that is the answer.

Most of the time what goes on under the guise of prayer is presentation of complaint list and shopping list. We complain against all that happened to us, which we didn’t want to happen and all that didn’t happen to us, which we wanted to happen. We complain against all that we wanted but didn’t get and all the unwanted things we got. Our complaint list is not complete without cribbing about how everything good always happens to others. This is followed by our long shopping list.

Actually our prayer should end in just one sentence, “Let Thy will be done”.

He is far more intelligent than us and knows what is best for us. So let Him run our lives. But most of us consider ourselves to be very intelligent and take the subcontract of our lives from Him. He also says “tathaastu” (So be it / Amen) and thereafter we suffer.

Prayer is not a “spare wheel” that we pull out when in trouble, but it is a “steering wheel” that directs the right path throughout.

When we pray for others, God listens to us and blesses them, and sometimes, when we are safe and happy, we have to remember that someone has prayed for us.

God responds more to prayers done for others rather than for self. 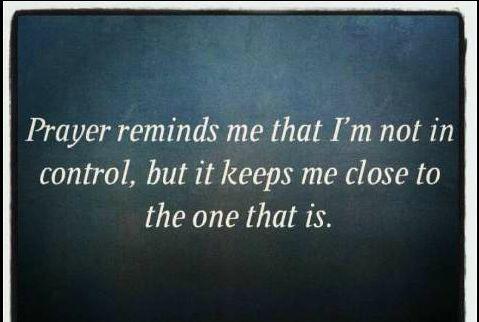 How God Answers Our Prayers…

How I Learned the Second Noble Truth

Something for Parents and Elders to Ponder Over