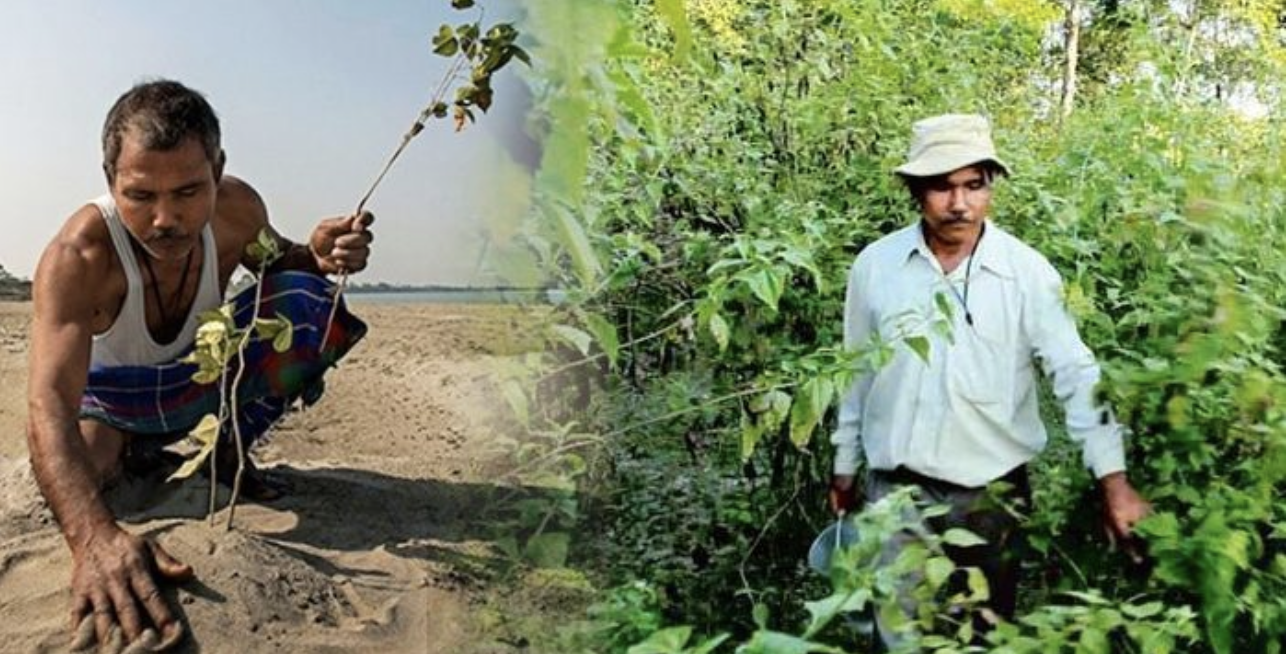 More than 35 years ago, a teenager named Jadav Molai Payeng began burying seeds along a barren sandbar near his birthplace in northern India, near the river island Majuli in Assam to grow a refuge for wildlife. Not long after, he decided to dedicate his life to this endeavor, so he moved to the site where he could work full-time creating a lush new forest ecosystem. Incredibly, the spot today hosts a sprawling 1,360 acre of jungle that Payeng planted single-handedly. The forest — larger than the central park in New York City — is now known as the ‘Molai Forest’.

For his exemplary contribution to nature, Payeng was honoured by Jawaharlal Nehru University (JNU), Delhi, and was given the title “Forest man of India”.

For Payeng, now a Padma Shri awardee (Indian civilian award), it all started way back in 1979 when floods washed a large number of snakes ashore on the sandbar. One day, after the waters had receded, Payeng, only 16 then, found the place dotted with the dead reptiles. That was the turning point of his life.

The snakes died in the heat, without any tree cover. “I sat down and wept over their lifeless forms. It was carnage. I alerted the forest department and asked them if they could grow trees there. They said nothing would grow there. Instead, they asked me to try growing bamboo. It was painful, but I did it. There was nobody to help me. Nobody was interested,” says Payeng, now 55.

“I asked my elders, what would they do if all of us were to die one day, like these snakes. They just laughed and smirked but I knew I had to make the planet greener,” he says.

He lived there with his wife Binita, his children earning income from dozens of cows and buffaloes he reared.

While it’s taken years for Payeng’s remarkable dedication to planting to receive some well-deserved recognition internationally, it didn’t take long for wildlife in the region to benefit from the manufactured forest. Demonstrating a keen understanding of ecological balance, Payeng even transplanted ants to his burgeoning ecosystem to bolster its natural harmony. Soon the shade-less sandbar was transformed into a self-functioning environment where a menagerie of creatures could dwell. The forest, called the Molai Forest, now serves as a safe haven for numerous birds, deer, rhinos, tigers and elephants species increasingly at risk from habitat loss elsewhere, as well as many species of trees and plants.

Despite the conspicuousness of Payeng’s project, Forestry officials in the region first learned of this new forest in 2008 when they were in search of a herd of 115 elephants responsible for damaging property in a nearby village.

The herd had totally damaged Payeng’s home and the villagers were abusing him for their crop losses. But he was having one of the happiest days in his life. For he saw life, with the size of elephants, coming back to his forest.

Since then officials have come to recognize his efforts as truly remarkable, but perhaps not enough. The large and dense forest was well appreciated by the officials. World took note of the man.

Now that Molai forest is living its own life, Payeng’s aim is to spread his forest to another sand bar in Brahmaputra.

“My friends have become engineers and are living in the city. I have sacrificed everything and this Jungle is my home now. The recognition and awards that I have received is my wealth and that makes me the happiest man in the world,” Payeng says.

“The education system should be like this, every child should plant two trees and take care of it until they leave school,” Payeng says.

“If each man plants a tree we will have enough oxygen to arrest climate change,” says Payeng.

“We’re amazed at Payeng,” says Assistant Conservator of Forests, Gunin Saikia. “He has been at it for more than 35 years. Had he been in any other country, he would have been made a hero and might perhaps been awarded a Noble Prize too.”

Now there is a documentary on Jadhav Payeng by National Geographic.

Today, global warming due to massive pollution and relentless deforestation resulting in water shortage threaten the very existence of life on earth.

The world needs more such superheroes who are trying to make the Earth a better place to live for one and all.

Humans are the only creature in this world who cut trees, make paper from it and then write, “Save Trees” on it.

“If you’re still looking for that one person who can change your life, take a look in the mirror.”

The Four Principles of Indian Spirituality…….

Bondage is a Mindset, a Conditioning…