Think you have problems?

Then read this and watch ‘your problems’ fade into insignificance. 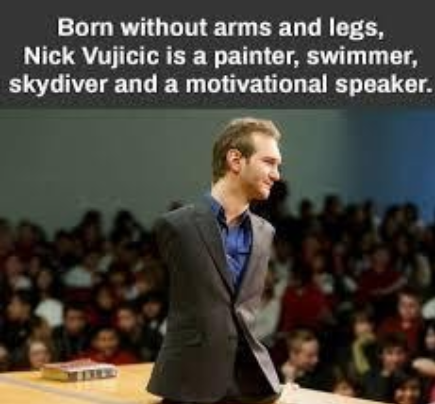 “Complain and remain or praise and be raised.” — Joyce Meyer

This amazing man speaks of his love for God and his ability to enjoy life! This story is truly amazing. Though born without arms and legs, Nick Vujicic has overcome life’s challenges through strength and hope found in God.

Nick was born with an extremely rare congenital disorder known as Phocomelia or autosomal recessive tetra-amelia syndrome, characterized by the absence of arms and legs. On the morning of his birth, his father was so stunned, he almost fainted. Nick’s mother refused to look at him or hold him for 4 long months. Doctors said Nick would be a vegetable.

Growing up in Melbourne, Australia, Nick struggled mentally, emotionally, and physically. He was faced with many challenges and obstacles. His schoolmates bullied him and teased him constantly because of the way he looked. Growing up, Nick struggled with depression and felt completely hopeless. When he was 10, he tried to drown himself in his family’s bathtub. After several attempts, he realized that he didn’t want his loved ones to suffer. Nick eventually came to terms with his disability and worked on adopting a positive attitude.

“Consider it pure joy, my Brothers, whenever you face trials of many kinds.”

‘And we know that in all things God works for the best for those who love Him.’

“That verse spoke to my heart and convinced me to the point where I know that there is no such thing as luck, chance or coincidence that these ‘bad’ things happen in our lives. I now see that Glory revealed as He is using me just the way I am and in ways others can’t be used. I give God the Glory for how He has used my testimony to touch thousands of hearts around the world!”

Rather than sending Nick to a specialized school for children with disabilities, his parents sent him to a public school. He learned to write, operate an electric wheelchair and use a computer with his toes. He completed a Bachelor of Commerce majoring in Financial Planning and Accounting.

At the age of 17, he had an inspiring encounter with his high school janitor that changed his life forever. The janitor told Nick that “You’re going to be a speaker”. The janitor saw something in Nick that he didn’t see himself and encouraged him to share his story.

He now travels the world addressing huge crowds. He has visited more than 60 countries and inspired millions of people around the world, speaking to people from all walks of life. He has given over three thousand talks, some of which have attracted audiences as large as 110,000 people.

“The challenges in our lives are there to strengthen our convictions. They are not there to run us over.” — Nick Vujicic

Today, Nick is one of the most in-demand motivational speakers in the world. Nick has learned not to let his limitations stop him from enjoying a happy life. In 2008, Nick met a woman that came to hear him give a Motivational Speech. They fell madly in love and got married four years later. Today Nick is the father of 4 children. Brimming with life, Nick loves to paint, swim, skydive and surf.

Nick has also founded an international non-profit organisation and ministry, Life Without Limbs, through which he campaigns against bullying. He has also published his memoir Love Without Limits, which is an international bestseller. Nick’s first book ‘No Arms, No Legs, No Worries!’ is a bestselling book and has been translated too over 30 languages.

Nick’s success story teaches us that anything is possible with a positive attitude. Never lose hope and believe in yourself. Keep moving forward without looking back.

“If God can use a man without arms and legs to be His hands and feet, then He will certainly use any willing heart!” — Nick Vujicic

The awesome thing about the Power of God, is that if we want to do something for God, instead of focusing on our capability, we should concentrate on our availability for it is God who works through us and we can’t do anything without Him. Once we make ourselves available for God’s work, guess whose capabilities we rely on? God’s!

“Having faith, belief, and conviction is a great thing, but your life is measured by the actions you take based upon them.” — Nick Vujicic

God will not give up on you…

Whatever may be the situation in your life, be grateful to God till the end… It could have been worst!

May the Lord Bless you.

Life May Not Give Us A Second Chance…….

Ibrahim Hamato – Nothing is Impossible

Persevere, Don’t Give Up: Some Quotes…