The strength of just “I can…”

There was a one hour interview on CNBC with Warren Buffet, the second richest man who has donated $31 billion to charity. Here are some very interesting aspects of his life:

He bought his first share at age 11 and he now regrets that he started too late!

He bought a small farm at age 14 with savings from delivering newspapers.

He still lives in the same small 3 bedroom house in mid-town Omaha, that he bought in 1958 after he got married. He says that he has everything he needs in that house. His house does not have a boundary wall or a fence.

He drives his own car everywhere and does not have a driver or security people around him.

He never travels by private jet, although he owns the world’s largest private jet company.

His company, Berkshire Hathaway, owns 63 companies. He writes only one letter each year to the CEOs of these companies, giving them goals for the year. He never holds meetings or calls them on a regular basis.

He has given his CEO’s only two rules.

Rule Number 1: Do not lose any of your share holder’s money.

He does not socialize with the high society crowd. His past time after he gets home is to make himself some pop corn and watch television.

Bill Gates, the world’s richest man, met him for the first time only 5 years ago. Bill Gates did not think he had anything in common with Warren Buffet. So he had scheduled his meeting only for half hour. But when Gates met him, the meeting lasted for ten hours and Bill Gates became a devotee of Warren Buffet.

Warren Buffet does not carry a cell phone, nor has a computer on his desk.

His advice to young people: Stay away from credit cards and invest in yourself.

Remember: “Money doesn’t create man, but it is the man who created money.”

On Earning: “Never depend on single income. Make investment to create a second source.

On Spending: “If you buy things you do not need, soon you will have to sell things you need.”

“Don’t waste your money on unnecessary things, just spend on them who are really in need.”

On Taking Risk: “Never test the depth of a river with both the feet.”

On Investment: “Do not put all eggs in one basket.”

“Honesty is a very expensive gift.

Do not expect it from cheap people.” 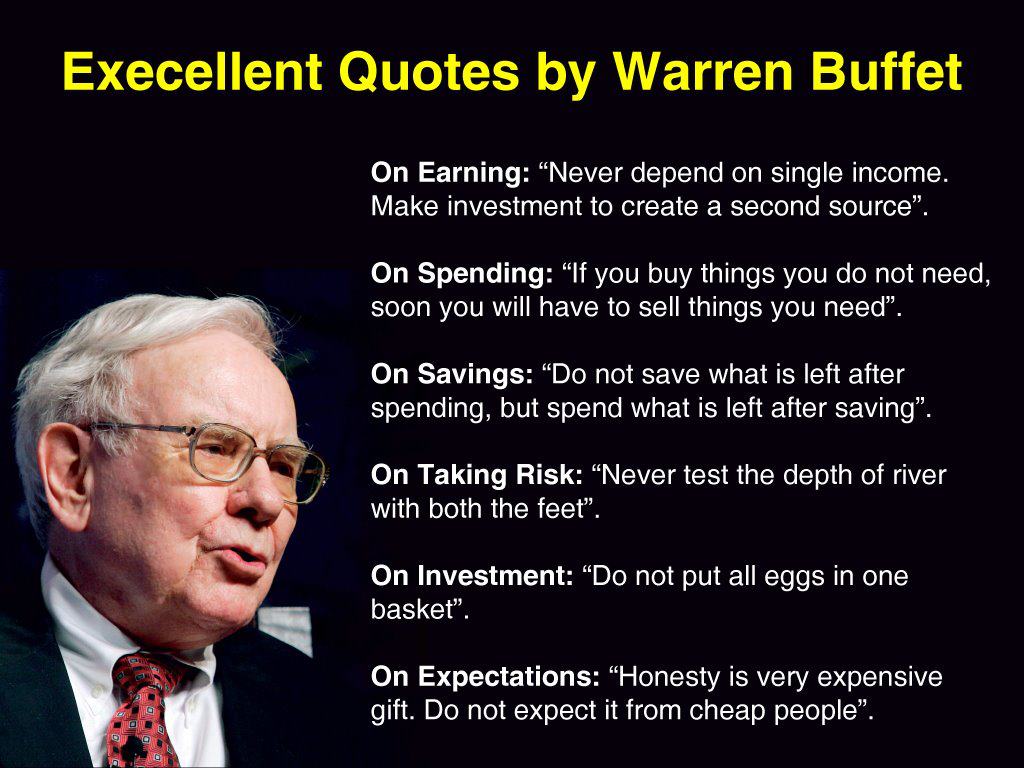 Modern Commandments to Live By……

Bill Gates on What Students Don’t and Will Not Learn in Schools….

Space and Detachment in a Healthy Relationship….

Nine Simple Rules to Have Contentment