Anger is defined as an intense attachment for an object when expressed towards an obstacle that comes between us and our object of attachment. It is also defined as revenge taken on ourselves by us for someone else’s mistakes, since it is our temperature and blood pressure that rises, it is our body that shakes and our eyes that become bloodshot. When we are angry at someone, we are actually angry at something linked with our own being, not with someone.

What Anger Does: Anger increases the rate of respiration. The rise in blood pressure also leads to sudden headaches. In the long run the elevated blood pressure raises the chances of heart attack. Researchers from the National Institute on Ageing (NIA) in Baltimore have found that people who are angry and aggressive face a greater risk for heart attack and stroke. These people showed a greater thickness of the carotid arteries in the neck, a key risk factor for heart attack or stroke, compared with people who were calm and tranquil. According to the researchers, hostility and anger emerged as the dominant predictor of coronary artery disease.

As the body temperature goes up one may also experience sweating. Expression of anger needs energy; as a result one feels tired. In the process, the level of stress hormone shoots up, further aggravating that ‘down and out’ feeling. As a result, one’s productivity takes a nosedive and work suffers. With so much negativity in the head, getting a good night’s sleep is almost impossible. Even if one manages to fall asleep out of sheer exhaustion the quality will not be close to what one’s body and mind needs. Lack of sleep and anger works in cyclical fashion. When one is angry, one doesn’t sleep well and lack of sleep leads to a foul state of mind which can trigger anger. Insomnia and other sleep disorders come with their own share of health problems. Being in a constant worked up state may lead to depression and can even produce ulcers. This can trigger off a series of potentially harmful behavioral pattern such as smoking and excessive alcohol intake. Sometimes people prone to anger use it to fight that feeling of depression and helplessness. Anger is not a natural and healthy state of mind and when it turns into a regular phenomenon, ill effects are bound to follow.

It seems we have been conditioned to treat any tension-triggering event, be it a small accident or a conflict with a partner or colleague, as a big problem or crisis. At these moments our bodies generate and release the stress hormones adrenaline and cortisol. Our heart accelerates, our breath quickens and our mind races. It’s all harmless if the tension or fright is brief and once in a while, like a near miss while driving, but the emotional disturbances of anger and hatred are like accidents that don’t end, and hormones turn into toxins. The depressive effect of cortisol upon the immune system has been linked to serious diseases and disorders. According to a recent medical research, “Cortisol wears down the brain, leading to cell degeneration and memory loss. It also raises blood pressure and blood sugar, hardening the arteries, leading to heart disease.”

Anger also slows down the healing process in case of wounds, injuries and surgeries. Anger stimulates the secretion of cortisol hormone. High levels of cortisol appear to decrease the production at the point of injury of two cytokines crucial to the repair process.

Losing our cool occasionally is one thing, but when flare-ups become everyday phenomena, the ones on the receiving end will start distancing themselves. We are then in the danger of becoming socially ostracized. Remember, anger is one letter short of “danger”. In the office environment we will lose the respect of our subordinates and our boss will view us as someone without any control over emotions. Anger is a condition in which the tongue works faster than the mind. Anger clouds our faculty of discrimination. We are too caught up reacting to the immediate and lose focus of the true nature of the problem. In fact, when one ought to be channelizing energies towards solving the problem, one will be doing just the opposite. We cannot see the issue from a different perspective and there are high chances that we may end up taking the wrong decision which could prove disastrous. So it is always beneficial to maintain tranquility.

Some quotations regarding anger:

“If you are right, then there is no need to get angry and if you are wrong, then you don’t have any right to get angry.”

“He who, before he leaves his body, learns to surmount the promptings of desire and anger is a saint and is happy.” — Bhagavad Geeta

“Negative feelings such as violence are damaging to life, whether we act upon them ourselves, or cause or condone them in others. They are born of greed, anger or delusion and may be mild, moderate or intense. Their fruit is endless ignorance and suffering. To remember this is to cultivate the opposite.”  — Patanjali, 2.34 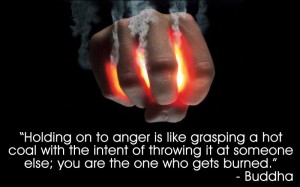 “Forget anger towards all who have offended you, for from anger springs a multitude of wrongs.” — Thiruvalluvar, Thirukural 303

“Anger is an acid that can do more harm to the vessel in which it is stored than to anything on which it is poured.”

“He, who angers you, controls you!”

“For every minute you are angry, you lose 60 seconds of happiness.”

How to handle Anger?

When anger is welling up within, the moment one becomes aware of it one should leave the place and be alone or with someone with a good sense of humour. Drink a glass of cold water. Look in the mirror and observe the contortions on the face resulting from anger. Practise deep breathing exercises at such time. Meditate and observe the anger in the mind as a witness. Do japa (chanting Lord’s name) in vaikhari vaani (with audible sound or aloud). Meditate on the emotion of anger. One can overcome the forces of negative emotions, like anger and hatred, by cultivating their counter forces, like love and compassion.

Laughing activates positive emotions in the brain. It is an expression of pure deliverance and total tension release. Laughing induces good mood and that in turn engenders hearty and intense laughter. One should have a hearty laugh without any inhibition for at least half an hour daily.

Nutrients like L-Theanine, a non-essential amino acid, found in green tea and mushroom, has a very calming and relaxing effect on the brain and gives relief from anxiety, stress and anger. It elevates mood. L-Theanine is great for anyone who has anger issues. Those who are on L-Theanine seem to find getting angry and “blowing up for no reason” much more difficult. Many studies have shown L-Theanine to be an anxiolytic, potentially due to increasing the dopamine levels, which make people happier. It’s difficult to feel happy and angry at the same time.

Certain nutritional deficiencies can also cause anger and irritability for even trivial matters.

Magnesium: Magnesium deficiency is often responsible for fatigue nervousness and anxiety (since it triggers an increase in adrenaline) and it’s been linked to various mood disorders. Sufficient, stable magnesium levels help us achieve a calm and relaxed state, the perfect precursor to a good mood. It’s so effective, in fact, that scientific studies have shown magnesium supplements to be beneficial in treating major depression, suicidal tendencies, anxiety, irritability and insomnia.

Vitamin B3 (Niacin): Niacin deficiency may cause anger and irritability. Niacin increases the production of serotonin, a mood elevating neurotransmitter in the brain. The body uses tryptophan, another amino acid, to produce both serotonin and niacin. Supplementing niacin frees the body to use tryptophan to make more serotonin. Crimini mushrooms and shiitake mushrooms are excellent sources of niacin. Asparagus is also a very good source of niacin. Other good sources of niacin include soy sauce, tofu, tomatoes, bell peppers, summer squash, mustard greens, eggplant, green peas, carrots, etc.

Vitamin B12: Deficiency of vitamin B12 also affects one psychologically and causes anger and irritability for even trivial matters. So one needs to find out if there is vitamin B12 deficiency or insufficiency and take vitamin B12 rich foods or supplements accordingly. Vitamin B12 is produced only in the colon, that too in inadequate quantities. For vegans some foods like soya, tofu, brewer’s yeast, yeast extract or yeast extract spread (Marmite) have vitamin B12. Otherwise they need to take supplements that are available from natural sources.

Ashwagandha / Winter Cherry (Withania Somnifera): It is an effective herb which helps in keeping oneself relaxed and cheerful.

Jatamansi / Indian Spikenard / Nardostachys Jatamansi: Jatamansi is known as one of the best herbs for relief from stress, tension, anxiety and nervous disorders. Research has proven that it helps to treat nervousness. Jatamansi is a very good herb to calm the agitated mind and keep it in relaxed mode. The rhizome and roots of jatamansi are used as an anti-stress agent. It imparts a sense of calm and peace to the mind. The rhizomes of the plant are also effective in treating hysteria and mental disorders. Jatamansi is useful to combat the effects of daily stress, anxiety and hyperactivity and improve the body’s ability to sleep well. It calms the muscles, reduces spasms and is also effective in relieving emotional stress and strain during menstruation and menopause. Jatamansi promotes awareness, relaxation and strengthens the mind.

But one matchstick can burn 1 Lakh trees.

Similarly one negative thought or doubt can burn thousands of dreams…

Stress-Proof Yourself: Convert Your Milk Mind into Butter Mind

Laughing Buddha and the Power of Laughter…

The Real Meaning of Peace….