We still have a few good human beings around who are doing some yeoman service without expecting anything in return… God Bless Such Souls!!!

“I don’t feed beggars. They can look after themselves. The mentally ill won’t ask anyone for food or money,” says N Krishnan who has been feeding them thrice a day for the past seven years.

For more information on N Krishnan’s trust, log on to: http://www.akshayatrust.org 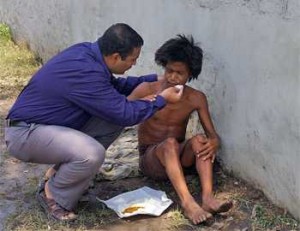 N Krishnan feeds 400 mentally ill people on the streets of Madurai three times a day, every day, all 365 days of the year. The 28 year old has been doing this for seven years via a charity called the Akshaya Trust.

A look into the kitchen reveals a spotlessly clean room.. Sparkling vessels stacked neatly, groceries and provisions all lined up in rows — rice, daal (lentil / pulses), vegetables, spices — all of the best quality. One would think this was the kitchen of a five star hotel.

Maybe Krishnan achieves that effect because he was once a chef at a five star hotel in Bengaluru (India).

“Today’s lunch is curd rice, with homemade pickle, please taste it,” he says, serving me on a plate made of dried leaves.

The food is excellent.

“I change the menu for different days of the week.. They will get bored if I serve the same food every day,” he says with an enthusiastic and infectious smile. 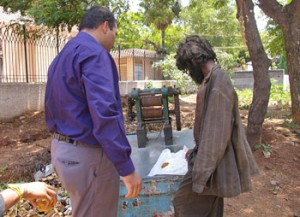 Krishnan cooks breakfast, lunch and dinner with the help of two cooks. He takes it himself to his wards on the street each day.

“I don’t feed beggars. They can look after themselves. The mentally ill won’t ask anyone for food or money. They don’t move around much too. I find them in the same place every day.”

That morning he put the food in a large vessel, the pickle in a smaller one and loaded it into a Maruti van donated by a Madurai philanthropist.

Ten minutes later we stopped near a man lying on the ground by a high wall. Krishnan put the food next to him. The man refused to even look at it, but grabbed the water bottle and drank eagerly. “He will eat the food later, looks like he was very thirsty,” said Krishnan.

At the next stop, he laid the dry leaf-plate and served the food. He then scooped some food and started feeding the mentally ill man himself. After two morsels, the man started eating on his own.

We then crossed a crowded traffic signal and stopped the vehicle. On seeing Krishnan, four individuals moved slowly towards the Maruti van.. They stood out in the crowd with their dirty, tattered clothes and unshaven beards.

They knew this Maruti van meant food. But they did not hurry, knowing that Krishnan would wait for them. Krishnan served them under a tree and carried water for them. “They are not aware enough to get their own water,” he explained.

And thus we went around the city till the Akshaya paatra was empty. Of course, it would be full again for dinner later in the day.

Image: Krishnan’s wards often approach him when they see his food-laden van 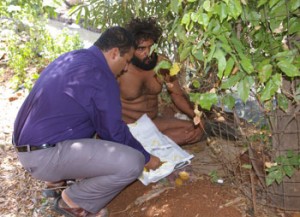 As we returned, a startling fact hit me. Not a single mentally challenged person had thanked Krishnan. They did not even smile or acknowledge him. Still Krishnan carried on in a world where most of us get offended if someone doesn’t say thank you, sometimes even for doing our jobs.

The food costs Rs 8,000 a day, but that doesn’t worry him. “I have donors for 22 days. The remaining days, I manage myself. I am sure I will get donors for that too; people who can afford it are generally generous, particularly when they know that their hard earned money is actually going to the poor. That is why I maintain my accounts correctly and scrupulously.”

He then pulled out a bill from the cabinet and showed it to me. It was a bill for groceries he had bought seven years ago. “This bill has sentimental value. It is the first one after I started Akshaya.

The economic slowdown has resulted in a drop in the number of donors. Earlier, they sustained meals for 25 days.

Software giants Infosys and TCS were so impressed with his work that they donated three acres of land to him in Madurai. Krishnan hopes to build a home for his wards there. He has built the basement for a woman’s block which will house 80 inmates, but work has currently halted due to a lack of funds. 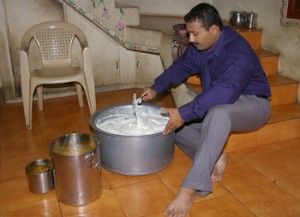 This, however, is not the sum of his good deeds. Krishnan also performs the funerals of unclaimed bodies in Madurai. He collects the body, bathes it and gives it a decent burial or cremation as the need may be.

He gets calls, both from the Municipal Corporation and general hospital for the funerals.

He recalls with a little prompting how one day he saw a mentally ill man eating his excreta. He rushed to the nearest restaurant and bought the man five idli-s. The man ate voraciously, and then smiled at him. The smile made Krishnan want to do it again and again.

Krishnan has not married and wonders if anyone would want to marry a man who spends his days cooking food for others. He is firm that his life partner has to agree to this kind of life.

His parents were initially shocked, but are now very supportive of their son. They advise him about the cuisine and also about how he can streamline the process.

One wonders why he left his job in a five star hotel to bury the dead and feed the mentally ill. To this he just smiles and says, “I like doing it.”

Mr. Krishnan is doing this –

– not for political motive, because they can’t vote

– not for any religious conversion, because they don’t know what they are

– not with any expectation to get something in future, because they wouldn’t remember him even if they become normal

He is doing this great work without having any expectation. He is doing it because “I want to save my people. That is the purpose of my life. I like doing it.”

We are proud of you Mr. Krishnan and feel still there are great human hearts around us.

A devotee seeing the people suffering around him asked God, “Lord, why don’t you do something?”

God replied, “Well, I have already done. I have created you.”

We are all His instruments through which He works.

The Four Principles of Indian Spirituality…….