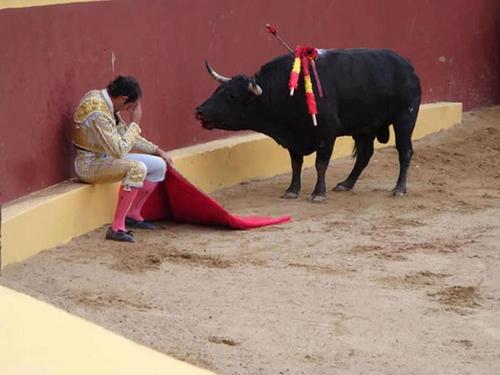 This incredible photo marks the end of Matador Torero Alvaro Munera’s career. He collapsed in remorse mid-fight when he realized he had to prompt this otherwise gentle beast to fight. Even after being grievously wounded by picadors, the bull did not attack this man. Matador Torero Munera went on to become an avid opponent of bullfights.

He is quoted as saying of this moment: “And suddenly, I looked at the bull. He had this innocence that all animals have in their eyes and he looked at me with this pleading. It was like a cry for justice, deep down inside of me. I describe it as being like a prayer — because if one confesses, it is hoped, that one is forgiven. I felt like the worst shit on earth.”

Great, if we realize that we have no right to hurt any living creature for sport or for pleasure.

“At his best, man is the noblest of all animals; separated from law and justice he is the worst.”

“Two things have surprised me — the intelligence of animals and the beastliness of men.”

“The real king of animals is man for his beastliness surpasses that of all others.”

“We have enslaved the rest of the animal creation and have treated our distant cousins in fur and feathers so badly that beyond doubt, if they were able to formulate a religion, they would, depict the DEVIL IN HUMAN FORM.”

“As long as there are slaughter houses, there will be battle fields. A vegetarian diet is the acid test of humanitarianism!”

“The greatness of a nation and its moral progress can be judged by the way its animals are treated.”

“I have always felt that the way we treat animals is a pretty good indicator of the compassion we are capable of for the human race.”

“Love of animals is a universal impulse, a common ground on which all of us may meet. By loving and understanding animals, perhaps we humans shall come to understand each other.”

“True benevolence or compassion, extends itself through the whole of existence and sympathizes with the distress of every creature capable of sensation.”

“Give animals respect, patience, understanding and love. And if you just change to one vegetarian day a week, that’s a wonderful step that will save animal lives. It means you have chosen something kind instead of something cruel.”

A Valuable Lesson to be Learnt from the Birds!!

A Bag of Hurts